Sometimes, simpler is better. Here is a new version of load cell temperature compensation, which is simpler and works better. All the beginning is the same (the model is unchanged), only the way the model is applied is different. Also I collected a new set of data with more precise temperature measurement to better test the model. The result appear on the last chart; it show that weight measurement drift with temperature can be almost completely eliminated.

In case M. Moderator reads this, can you please remove the previous post (I am repeating everything here below)) ? It would make the thing easier and quicker to grab for new comers interested in this topic. [M. Moderator @wtf: You are reading the updated version from April, 11th 2022, right here!]

The weight sensor is a strain gauge, which is a resistor which value varies very slightly when the metal in which it is embedded deforms under the effect of the weight to be measured. This resistor forms with 3 other fixed resistors of known values a Wheatstone bridge. The circuit to which the strain gauge is connected measures the voltage difference VG and then a simple calculation gives the resistance RX of the strain gauge. 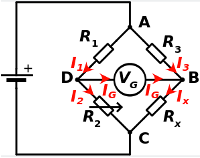 When no load is put on the scale, the readout of the ADC is called the offset.

The output of the ADC when a load is applied to the scale represents the value of that mass, plus the offset.

Therefore, in order to measure a mass, we measure the output of the ADC when the mass is applied on the scale, from which we subtract the offset and the result is divided by a fixed factor representing how much the ADC value varies for 1 g of load. Load cells providers state that their products are “temperature compensated”, which means that this difference (value read when load is applied minus value read when no load is applied) is a more or less independent of temperature. But the value of the offset itself IS temperature dependent. According to my measurements, it varies linearly with the temperature with a slope depending on the load cell. I tested six different H40 load cells from the German supplier Bosche (by far the best supplier I have tested) and I was able to measure slopes that varied from 1 to 7g per degree. When the temperature fluctuates 20 degrees, the best loadcell drifts by 20 g, which seems acceptable and probably does not require implementing temperature compensation. On the other hand, the worst one drifts by 140 g for this temperature range, justifying a temperature compensation.

We will see in this document how to implement an efficient temperature compensation based on a proposed modeling of the loadcell and corresponding mathematical calculations.

At the end this document, we will apply the proposed temperature compensation formulas to actual data collected on a beehive scale and will show that temperature drifts can be almost entirely compensated thanks to the proposed model. 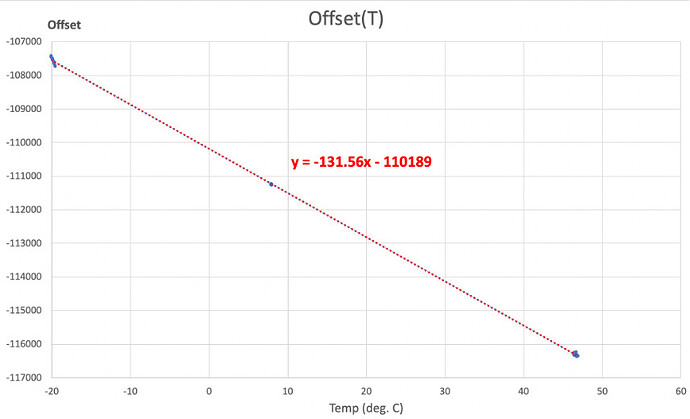 The graph above shows the variation of the offset measurement as a function of temperature for an “average” load cell among the six that I have tested. In this particular case, 45 units correspond to 1 g so the offset varies 2.85 g per degree.

and the outside temperature

For an electronics engineer, all of this reminds what happens when a capacitor is charged through a resistor from a constant voltage source.

And as expected, when a temperature step is applied to the load cell mounted in the scale, we can observe that the ADC output evolves over time with a curve that looks a lot like the charge of a capacitor C (here the heat capacity of the scale) at constant voltage (here the temperature step ∆T) through a resistor (homogeneous with the inverse of the thermal conductivity: 1/σ ). 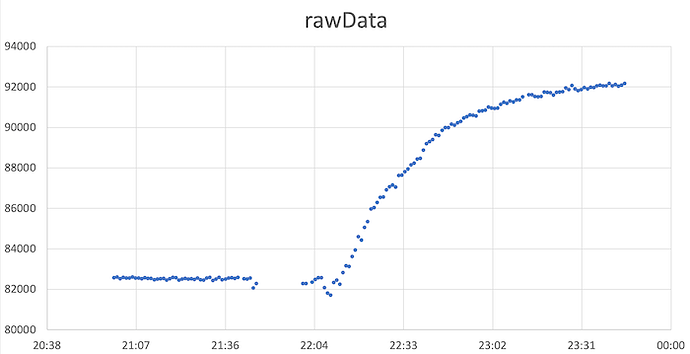 We now need to put all that in equations…
In the analogy with the evolution of the voltage U measured on a capacitor C when it is charged at constant voltage E through a resistor R , the diagram is as follows: 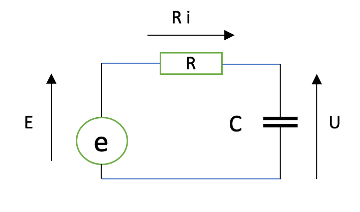 The charging current i is equal to the amount of energy stored by the capacitor per unit of time, i.e. i=dq/dt and therefore, knowing that U=qC the current is

We can therefore express the voltage E as follows:

It can be demonstrated in mathematics that the solutions

of a differential equation of order 1 with constant second member, of type

are of the form:

k being a real number that is determined in physics with the initial conditions. In our case, the differential equation can be written:

And the solutions to our differential equation are therefore of the form:

We know that at time t=0, the increment of the offset is zero and we can therefore deduct that

And therefore, the offset increment since the time the temperature step was applied is calculated as follows:

The time constant σ/C is unknown; we will therefore determine it graphically by representing on the previous graph the equation obtained above. We see on the graph below that with a time constant equal to 17 (the time being counted in minutes), the two curves overlap almost perfectly, which seems to indicate that the chosen model is correct. 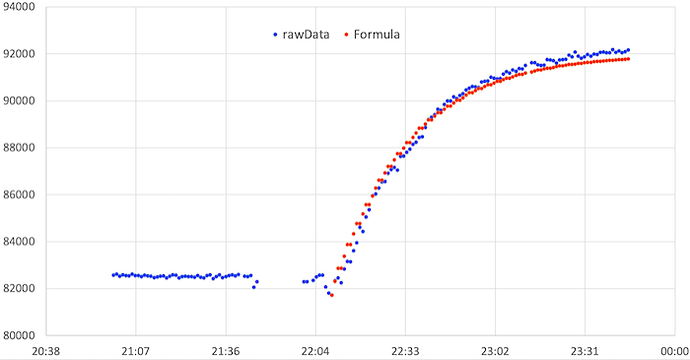 By the way, offset being proportional to weight, the previous equation can also be written as:

(after an infinite time) is applied, the actual readout of the weight is evolving over time according to the above equation, knowing of course that the weight itself is stable over time.

But we are not done yet. The experiment and the calculations that we have just made have allowed us on one hand to verify that the chosen model is correct and on the other hand to determine graphically what is the time constant of the scale measurement process, but we still do not know not how to calculate the temperature of the load cell based on the outside temperature, which of course is varying over time instead of being constant as in our experience…

Because we know the time constant is 17mn, we will consider only the last 5 measures – which means that anything that happened before 75mn ago is ignored.

In order to test this model, we have put the scale in a closed box (to make sure temperature is correctly measured, avoiding the effect of sun shining on the scale) with a ~2Kg weight on it and we put this box outside during a week. Then we collected the raw weight measurement every 15mn along with the temperature at the same time.

Here is the corresponding chart:

The weight measurement when a constant mass is applied on the scale does varies quite a lot with temperature. We have seen before that weight readout is proportional to temperature and by looking at the extremes points of the above graph, we can calculate what is the slope α of corresponding linear curve

So when a temperature step

is applied on the scale, the weight measurement changes – after an infinite time where temperature stays constant – by a value

The previous equation can therefore be written

So each time we take a new measure, we applied this formula with t=15mn,

The graph here below is the same as the previous one, on which the red curve representing the temperature compensated weight is shown. This weight is staying relatively flat when temperature changes, which seems to indicate that the model and the way it is applied is working OK.

The glitch in the middle corresponds to a move of the box in which the scale was placed from shadow to sun (as indicated by the sudden temperature increase). It’s likely that this move has induced some false measurement.

Apart from the glitch resulting from a move of the scale, we now have a weight measurement system that is largely immune to temperature changes.

Practically, the key to have a good measurement is to make sure the temperature is correctly measured, which is not as simple as it seems especially when sun is shining (as soon as sun shines directly on either the load cell or on the temperature sensor, it creates bad measures; and if it shines on the cable bringing the load cell signal to the ADC, it creates another perturbation - called Seebeck effect - that is well explained by @weef in this post).

Hey hsors,
Great work! :) Is your experiment-data by chance collected on Hiveeye’s swarm-server? If so, I would probably be tempted to try how one could apply the integration you suggest successfully afterwards, just on the raw data.

Is your experiment-data by chance collected on Hiveeye’s swarm-server? If so, I would probably be tempted to try how one could apply the integration you suggest successfully afterwards, just on the raw data.

No, I have my own server, the data aren’t on Hiveeyes server. I haven’t yet implemented the algorithm in the code (will do soon…). For the test, the raw data were processed off-line.

Hi Henri / @hsors, the compensated “line” is awesome, nearly no peaks, even in a conservative view +/- 10 g mostely generated by a single spike! I played arround with some basic linear compensation formulars and got never that accuracy!

I assume that this compensation is a treatment for every single load cell with individual parameters and so variables in the formula. We have seen different “reactions” to temperature even on load cells from the same manufacturer and the same model.

Would it be a good idea to have a “average” compensation formula lets say for the Bosche H30 load cell as a result of testing e.g. five H30 cells and average the outcome or is this not a good idea because the formula is very specific for the behavior of a single cell and we would make more noise in case we treat all H30 cells with this treatment?

Would be really great try to implement this as Grafana formula in a dashboard! I asked some beekeeper from the documenta project to leave the scales empty or with a constant weight perhaps we can find some raw data at Grafana (use the drop down to inspect hive-01, hive-02, ...)

Hi Clemens !
I also have tried before different linear models with little success…

Unfortunately, the parameters greatly vary by load cell. I have one LC that drifts by 1g/°C and another one by 7g/°C. Difficult to avoid an individual calibration…

I was thinking of implementing this in the scale itself (not done yet…) but if it’s possible to do that in Grafana, that is a good option. I am new to Grafana and haven’t dug into it very much; until now I was using Google Sheet with an API from a python program retrieving the hive data and loading those data into a google sheet file. I am now switching to node-red/InfluxDB/Grafana.

May you attach the raw data of your plot above in any format to this thread, I can try to import this data in Grafana (we have a bulk import option there) and we can try to implement the compensation by software. I think we need the help of Wetter / @wtf as our Grafana DJ in residence but it could be a good starting point. Manipulating the data on the visualization level has some pros but also cons, but for playing with an algorithm it may be a better option than hard coding it in Arduino code or write compensated data to database directly.

Sure, here is the file in XL format.
If it’s not clear we can set-up a call for explanation.
TemperatureCompensationLC5-vf.xlsx (246,0 Ko)

And finally, here is the code along with some explanation. I implemented it in the microcontroller and it has been running for 24H outside (external temperature ranging from +15°C to +25°C) with a 2066g mass on it; weight readout has remained stable, at +/-2g (2064 to 2068g), knowing that 2g is the resolution of my scale.
weightCompensation.cpp (2,0 Ko)

Code explanation is in the following file:
Implementation.docx (25,5 Ko)