Why use so many interior temperature sensors in just one hive? 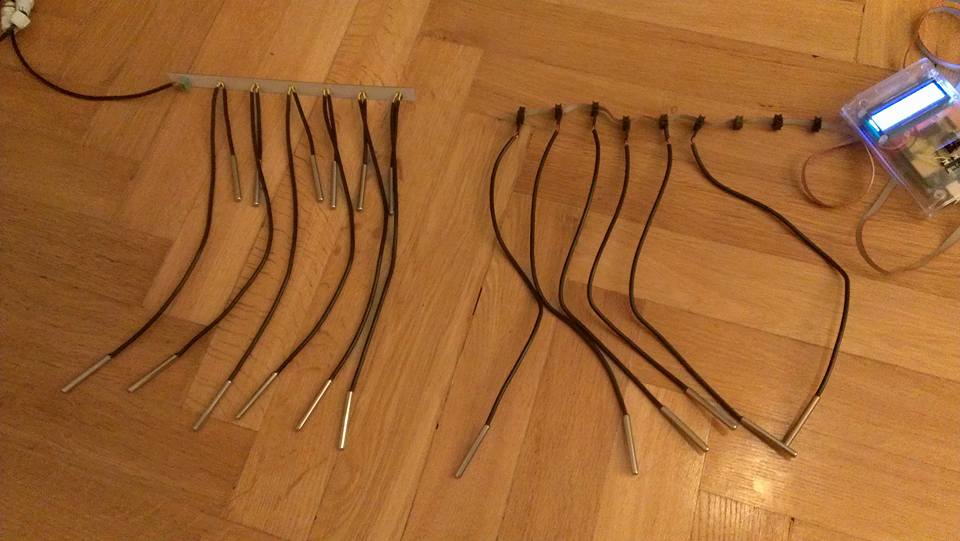 Now I am sure you’ve done much more research than I have.
That’s why I am asking.

How necessary is it to know the temperature in so many parts of a hive?
What information does it bring?

Also, bees like to seal everything with propolis. Is it a big problem? Is it a problem with internal Humidity sensors? How would you deal with such a problem?

Thanks for the replies and sorry if this is the wrong topic.

The purpose for so many temperature sensors was to monitor the size of the broad nest. We know that a temperature of 35 °C indicates broad activity. In hot summers a higher temperature is possible especially in the honey supers and of cause less temperature is nearly all over the year outside the broad. So if we measure 35 °C ± a half degree we know very well that there is broad.

A “perfect” setup would be a sensor between every comb. Best would be to have two sensors in any comb alley. A small and not centered broad nest (as you can see it sometimes end of winter) could be detected so also. And you like this for every broad box. With 10 combs you would have 9 or 11 (in case you count the space between comb and box also) alleys, two broad boxes (x2) and two sensors per comb alley (x2) that means 36 sensors.

But this is perhaps overkill. ;-) So let us use only one sensor per comb and It is also unlikely to have broad in the border area, so we will concentrate on the central nest area. In the most cases we know wheater the broad is in the fist or second broad box, so let’s skip the second layer also and we will come to a number of 5 to 7 sensors to do the job with as much effort as needed but the minimal necessary hardware.

You can see on the left side of the picture a prototype for a hive with two broad boxes. I would not recommend this. It is a PCB on top, expensive, not so easy to remove and with the solder joins on top not usable with some queen excluder that lay directly on the combs. It is also difficult to pass the sensors for the upper box through the combs in the top box.

Wax and propolis is no problem for the water proof temperature sensors. It will take a bit longer till temperature changes reach the sensors but this is no problem, we have not fast changing deltas. This is different for the humidity sensor. Here you need an entrance for floating air. We are using a simple queen cage to protect the sensor. In case it is built up with wax you have to change the cage or clean it.

Wow, thanks for the detailed explanation!

I didn’t think about measuring nest size that way.
I was thinking the weight sensors would provide that, but I guess you’re correct, a lot of things attribute to weight.

Do you have any data available that shows how it looks?
Also, from what I understand you use basic Thermistors, right?

I guess I could avoid those questions if you could direct me to an article explaining the hardware, I haven’t found any yet.

Sorry a long and German thread but you find a translation icon in the footer of every posting for auto translation.

We are using digital DS18B20 sensors with a good accuracy and you can use this sensors as “one wire” so all sensors on the cable share Vcc, GND and only one data pin for all sensors! According the spec more than 100 are possible.

A nice data visualization example made by @wtf can be found here:

And a very interesting research outcome with this sensors is

I guess I could avoid those questions if you could direct me to an article explaining the hardware, I haven’t found any yet.

So even better that you’ve asked!

I guess we’re getting some blind spots for what new people here want to read when arriving. As long as one can’t find these answers easily, please ask for them! :)

How necessary is it to know the temperature in so many parts of a hive?
What information does it bring?

So many questions at a time!

Do you have any data available that shows how it looks?

This serves for ‘measuring’ the size of the brood nest. Illustrating @clemens’ links with a combined image from there: 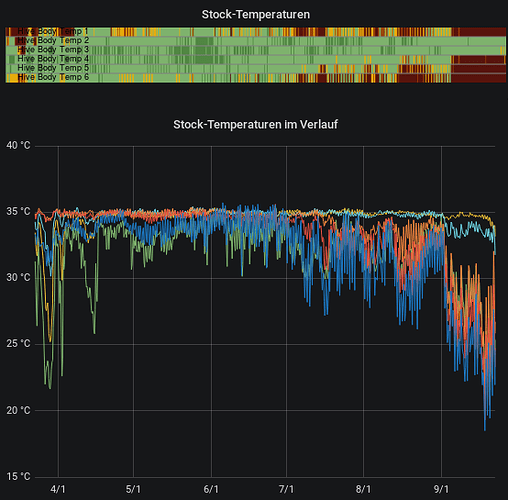 Also, from what I understand you use basic Thermistors, right?

No thermistors here (yet). No need for high update rates, and in very most cases no energy budget for that. This would be a science use case involving a discrete OPAmp (example with KTY81 and AVR or another even simpler one) or other dedicated RTD front-ends.

Only the finest quality Chinesium!

The wiki is… well in a bad shape. Doesn’t explain much.

Only the finest quality Chinesium!

yes, I’m tired of this … again and again people buy this crap expecting it to act like it’s written in a Dallas, Maxim, TI, AD, LT, sensirion, Bosch … datasheet, and then stopping by to complain “hey, the driver isn’t compatible with my hw!” … m(

What software are you referring to when you say: ‘this’ sw?! As you know, this is run by several software in diffrent layers. Please be a little more specific.

What you see above is Grafana, those links are published above.

If you want to run a stack of it yourself (Grafana / influxdb / mosquitto / kotori), this would be a start:

Basic setup 1. Install DaqZilla On our package repository on packages.hiveeyes.org, we provide packages for Mosquitto, InfluxDB, Grafana and Kotori which should fit together well and make installing easy on both amd64 and armhf systems. For detailed installation instructions, please follow up at [1] and [2]. The first step to using any software package is getting it properly installed. Please read these sections carefully. Todo: Improve Hiveeyes-specific setup documentation [3]. [1] Kotori 0…

… but still at least one sensor node will be needed too.

The wiki is… well in a bad shape.

Rly? Didn’t even know that we had one! :)
What wiki are you referring to?

C’mon, these links on the landing page hiveeyes.org cover a majority of thing, though they might not be up to date in terms of all the newer (2019-) developments with ESP32-based devices (whether Pycom or unbranded) as well as all what came with Micropython.

Oh, right, I called the documentation a “wiki” my bad.

See, I had to contact you people to figure out how the documentation works.
Now I know that I am not supposed to find 1 thing, but a plethora of different things.

When I go to the “Do it yourself” page in the docs… yeah pretty much nothing there. All just the “To do” things.

The “Contact us” page consists of an incorrectly executed e-mail link, which confused me and I actually first thought that it was a note for the administrator to fix it later (I just now realized what it meant), still I am pretty sure it’s fixable.

The docs have little to no structure, key points like the software needed or how to use it are absent and buried under a gallery of images on the page so big I didn’t know the page continued downwards.

Now don’t get me wrong, I sincerely appreciate what you have and want to continue making, I am just trying to provide some constructive criticism for anyone that needs an opinion of the current state of the site.

Thank you for your help, I believe I will be in a much better knowledge spot now!

The [documentation] is… well in a bad shape. Doesn’t explain much.

So true. There’s no clear way to follow any documentation in a top-down or tutorial-like way. Apologies! However, we have quite something around, it’s more a matter of finding the right thing. Feel free to ask!

When I go to the “Do it yourself” page in the docs… yeah pretty much nothing there. All just the “To do” things.

@weef already put out some links. Please feel free to ask further, we will be happy to give you the best links available within our discussion forum [1].

A specific section got some love recently. On Bee Observer Online Dokumentation, we are outlining the construction and assembly of the Bee Observer kit.

This kit is based on a datalogger software written in MicroPython.

you might want to have look at GitHub - hiveeyes/terkin-datalogger: Terkin-Datalogger for MicroPython and CPython.