we always had planned to ramp up such a setup you apparently did right now. Very cool, thanks! Actually, we talked with @tiz (btw. he is also a Martin) about the very same thing you are showing us right now, a DIY climate chamber – would it actually be the correct phrase for it?

Good luck to you and all others who might join here to draw further conclusions from that and to improve our shared knowledge to improve the respective implementations. Thanks again for going up there and keep up the spirit!

Any other ideas are highly recommended.

Unfortunately, I’m not that much of a hardware guy to be able to give reasonable recommendations about that topic. Saying that, I’d like to encourage all others who feel ready to contribute valuable things here.

P.S.: Feel free to start an appropriate thread named “DIY climate chamber” or similar, where specific details about this endeavor could be discussed related to the temperate compensation thing we are coming from. [edit: @clemens did already, thanks!]

I will put weight on it.
I will just put the electronic inside the freezer and the cell outside.
I will switch that - cell inside, electronic outside.

Very cool, ahm, hot! :-) There are a lot of assumptions regarding load cells and temperature. So it would be really nice to have some facts. What is the influence of

For testing it would be also nice to have the cable outside the climate chamber or have load cell and electronics at a constant temperature but heat up the cable e.g. with a bit hot air from one side only to simulate sun radiation.

Would it be possible to justify your scale first! A difference from 25 000 to 50 000 can mean 50 g so neglectable or 5 000 g so a significant change! Without this calibration the raw values are a bit useless or at least less meaningfull. :-)

Hi,
thanks for the cheering words, it is nice to see that my work is also interesting to others and may help you to build better scales. I will open an thread named “DIY climate chamber”, the setup is very simple.

First of all, i will also do all measurements with a ADS1232. to see the difference between the HX711 and the ADS1232. But it will take a while, i just ordered the parts, and delivery will take 6-8 weeks :)

Would it be possible to justify your scale first! A difference from 25 000 to 50 000 can mean 50 g so neglectable or 5 000 g so a significant change! Without this calibration the raw values are a bit useless.

I will do the test with a calibrated weight of 20kg. Then we will see how much the delta in raw-values means delta in weight. With both datasets, we can justify the scale offline.
I keep you informed.

First of all, i will also do all measurements with a ADS1232. to see the difference between the HX711 and the ADS1232.

Thank you so much! Personally (as a software guy), I’d be interested which ADS123x driver would be used these days when doing things on Arduino, as I am guessing you are also doing?

The last time I heard from the community, the arduino/libraries/ADS1231 at master · hiveeyes/arduino · GitHub was en vogue and the ESP8266 was becoming a thing, so we have been able to contribute Fix compilation errors for ADS1231 library on ESP8266 · hiveeyes/arduino@e123247 · GitHub there.

However, I don’t actually know which hardware you are using with your setup, but …

ah! Are you still running the same setup? If so, you won’t probably care about Arduino drivers anyway.

However, I would like to encourage you to do so! We moved the relevant discussion to Use realtime systems for reading values from digital sensors in order to reduce distraction by these topics here.

I have the first data with loaded cell – the heating phase is still in progress, I have data up to +15°C 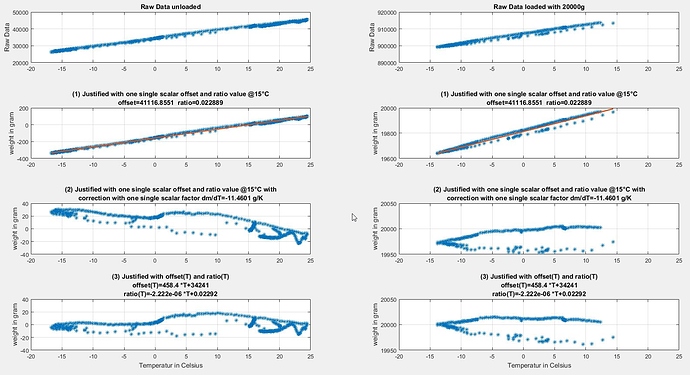 Comparing (2) and (3), shows, formula (3) is the better way.
I also tried a polynom third-order, but this doesn’t get better results. So keep it as simple as possible, a linear function is doing the job quite good. 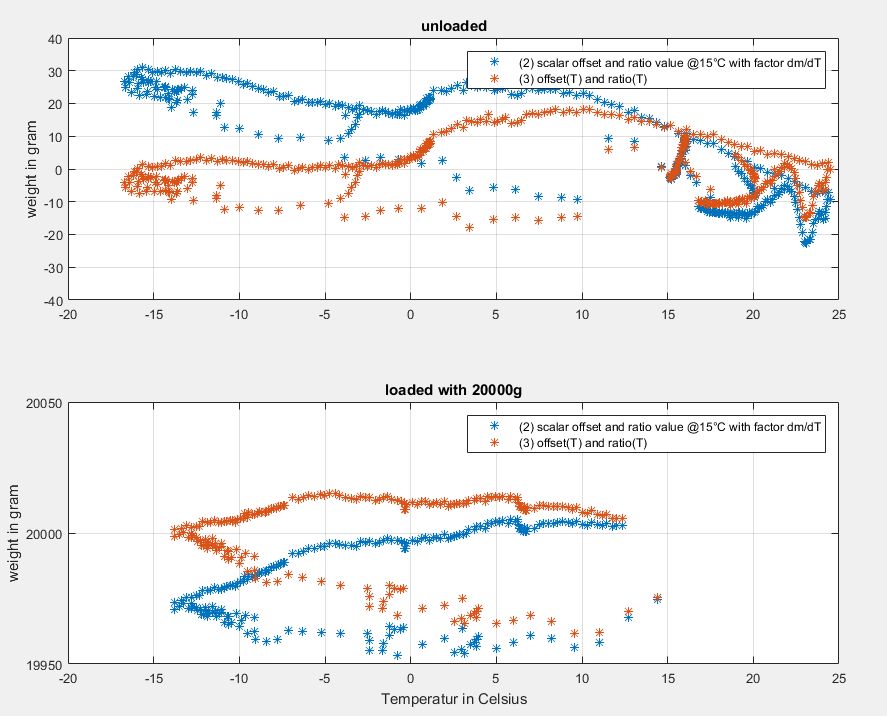 So far so good - i will keep you informed

Great research and nice findings! A temperature conpensated fluctuation of ± 20 g over a range from -18 to 25 °C is awesome.

Also interesting that measurements with no load are not so reliable as with a certain load. But this reflects also the most datasheets.

Yes, this is my setup.

Enjoy and keep up the spirit.

P.S.: I will make this post into a Wiki article. If you want to collect further resources here, feel free to edit as appropriate.

Hi,
regarding the question : Which part is causing the temperature dependencies?

I wasn’t expecting that, bit it is clearly the load cell! A bit disapointing, since i thought the BOSCHE Cells are better. cell is unloaded, i have 3 more sets of scales one by one is going in the chamber the next days. 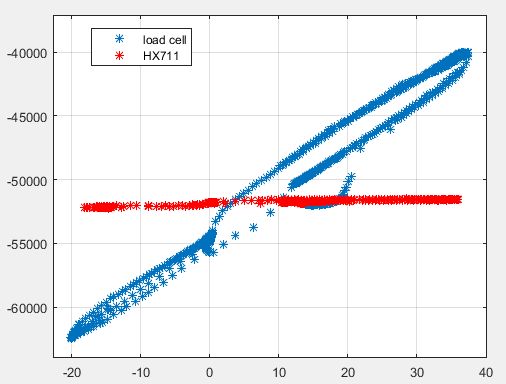 What exactly does here the ordinate show, which unit and scaling?

In the previous diagram the ordinate shows the raw value of the HX711. 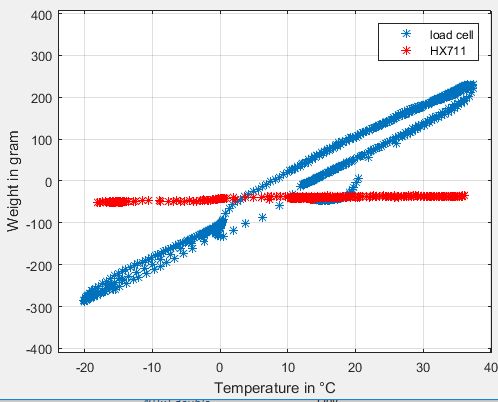 I just have measurements with the cell unloaded, which is not optimal (since there should always be a minimum load on the cell), but still, you clearly see :
The temperature-dependency is not coming from the HX711!

I am disappointed, I thought Bosche cells are better.
I probably will do the measurments also with loaded cell, but i don’t know when, since i don’t have a lot of time right now.
I asked Bosche, but i just got the test specs and the norm (Metrological regulation for load cells) and i don’t understand the reading :)
r060-e00(1).pdf (1006,3 KB)

No, look at Bosche’s H30A datasheet, they clearly state, that they don’t require a minimum load (Mindestvorlast (E min) = 0 ), so for this load cell it is a legitimate load case. Second, this is how you can measure the temperature drift of zero (aka offset) - also needed as Bosche unfortunately does not state these drifts but instead only refers to the OIML… 8(

I am disappointed, I thought Bosche cells are better.

Your results are good: over a temperature range of about 58 K (-20…+38°C) the scale shows an abs. offset change of about 520 grams (could be shown as a differential error of ±260g). This is 9g / K error (for comparision: @thias ’ H30A shows about 8,7g / K). These results were achieved while stressing the cell with an ever wider temperature range than specified as compensated range (to -20 rather than to -10°C) - and no additional non-linearity has been observed. This also remains a good result.

I am not sure if interpret that right, but in the linked PDF
5.5.1.1 Temperature limits
Excluding temperature effects on minimum dead load
output, the load cell shall perform within the limits of
error in 5.1.1 over the temperature range of – 10 °C to

The error is defined in 5.1.1, which is about one verification interval (Table 5 Maximum permissible errors (mpe) on pattern evaluation), so max 33grams over the temperature rang of -10 to +40°C.

This is my interpretation, i am not sure if i understand that correct.

Now, all 4 scales are calibrated, the difference between the setups is not negligible.
So without individual temperature compensation - at least for me - the accuracy with the H40A is not sufficient! 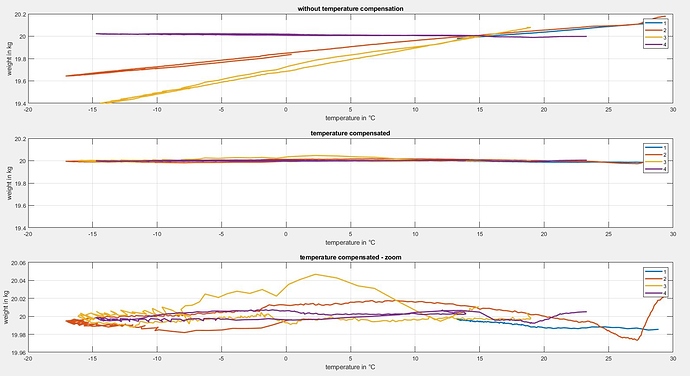 Now, all 4 scales are calibrated, the difference between the setups is not negligible.

Sorry to bother you again, @zmaier. ;-) You have in the first graph 4 lines, purple, yellow, orange and blue, this are the same setups? All with a HX711 and a Bosche H40?? So why has the purple one nearly no temperature effect and the yellow one such a big? I fear I do not understand the difference of the 4 “settings”. May you clarify this, thanks!

So without individual temperature compensation - at least for me - the accuracy with the H40A is not sufficient!

Is the only difference that you are using different load cells (but all H40 from Bosche with the same max. weight?).

Can you imagine what was special / other on the purple setup? Other power source, flux cleaned vs. not cleaned? screw terminals vs. cable soldered? Cut / shorted cable? Really no difference??! The purple setup is great. So in case we can find “the error” – and it is not inside the Bosche H40 this would be great! ;-) Many thanks again for the effort and time you spent!

I have absolutely no idea.
I started the thread below, because i have seen those huge differences between the setups.

Temperature compensation for HX711 and / or load cell? Fehleranalyse / Troubleshooting

I have 2 identical scales, both have the green HX711 and Bosche H30A. I read, that the green HX711 boards do not have a connection between E- and GND (i checked that, my boards didn’t), so i connected them. As read, the connection is also good for stability reasons. This was already done before i figured out the temperature behaviour. Yesterday evening i cleaned the soldering and I removed all flux. This was not really an improvement. See : https://thingspeak.com/apps/matlab_visualizations/27…


To figure out why, “built” the test-chamber.
All setups have the same build-up.
Flux is cleaned
HX 711 and Load Cell is soldered with the original cable (not shortend)
Power-Supply is the same
I have no idea why?
It seems the Load Cells are really that “weak”, see my posting where I compared the temperature behavior just of the cell and just the HX711. It clearly comes from the cell itself.

What are your experiences? Should i contact Bosche with this issue?