Timing things on MicroPython for ESP32

With his first tests published in spring 2018, he observes a test program producing a 20µs pulse and then consuming some memory, repeating both within a tight loop. This process is heavy on both cpu resources as well as memory allocation and deallocation, so any glitches coming from not having a solid foundation scheduling things appropriately will be observable right away. We will see how MicroPython’s garbage collector will well interrupt your program and stop its world intermittently, in turn mostly producing erroneous timings without further ado.

We will see that manually invoking the garbage collector by calling gc.collect() right before the initial pulse improves the situation significantly. This is a countermeasure to somehow control the garbage collector and prevent it from interrupting your program at arbitrary times, which is just bad when doing things which require appropriate timing.

However, please recognize this is just a workaround. The best thing in this environment is to not having any memo

These results are not good. There is no pulse shorter than ~40µs, sometimes extending to over 500µs on the FiPy. 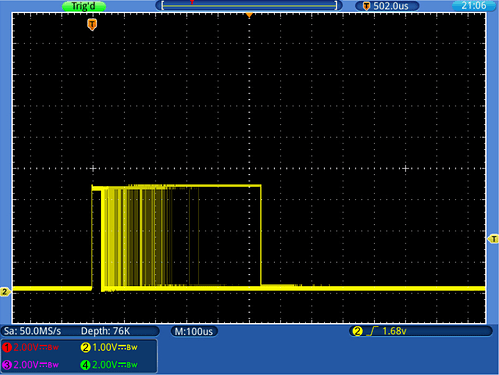 The longest pulse seen for the FiPy is now 65µs. Please note that the time scale has changed in this picture. 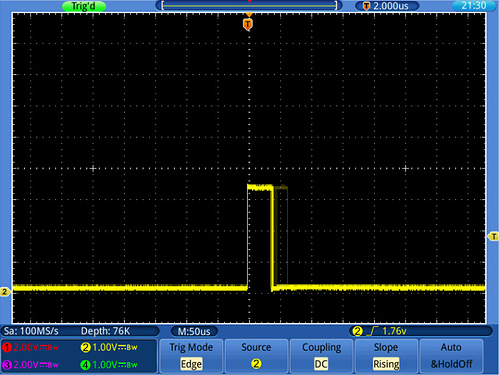 2. Tuning timings in the onewire.py library

robert-hh
Feb 3, 2018, 3:56 PM
Besides that, from similar test, like IRQ latency, the [bad timing] results are NOT surprising [at all]. Making timing precise on chips with serial flash (and serial RAM) requires a lot of consideration.

I made another test, rebuilding just the initial part of write_bit(1) (which is similar to read_bit()). It shows the initial low period with and w/o the sleep_us(1) lines.

– Measuring timings on the LoPy4 and FiPy with an oscilloscope

The sleep_us(1) calls in Pycom’s onewire.py occasionally extend the wait period to about 30µs, effectively missing the read window at 15µs (left image).

Without one invocation of that sleep, the duration of the initial pulse is sometimes still extended, but much more seldom and shorter than 10µs, being still in the safe range (right image). 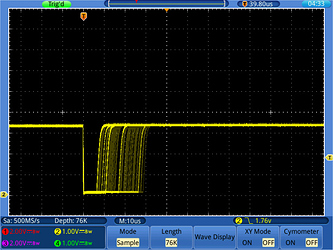 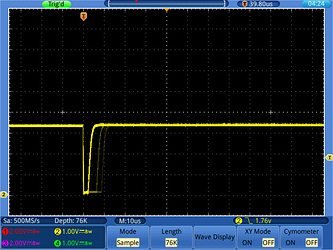 From my point of view no sleep_us(1) is required for LoPy at all.

Disclaimer: I just have done tests with a DS18X20 but no other onewire devices.

@robert-hh
Without the second sleep it fails for me on my WiPy2 and Lolion32.
Without the first sleep it works fine.

@livius Then it’s better to keep the second sleep_us(1)'s in both the read_bit() and write_bit(). In the latter, it does not hurt anyhow. It just ensure a minimum time between two write_bit() events.

Still reading? You know who you are.

While observations like outlined above might make designers and users of PLC / SPS systems both laugh out loud and burst in tears at the same time, these are actually obvious things which should always be anticipated, especially in this very environment.

Actually, who would even think of doing sampling and toggling directly in (Micro-)Python at all? No matter what, in this spirit you will not be surprised to hear that

This is obviously a squirrel. – Wat. Destroy all software.

Is there something like a disable_irq() for the garbage collector?

At least temporary or with a timeout for i2c or onewire, a few milliseconds of uninterrupted CPU time should be enough as long as you do not exhaust memory of course.

But that’s the same rules as in C:

I hope something similar could work as well for us in MicroPython. :)

Even though this is a busy-wait, time.sleep() does not mean that “nothing happens”; the tick rate in the underlying operating system is 10ms; any sleep time (necessarily using time.sleep_ms() or time.sleep_us() ) equal to or less than 10ms will preempt other tasks!

– Intro to MicroPython on the ESP32: MQTT

While I’ve had success porting the prior micropython bitbanging onewire code (it was mostly changing the IO mode to open drain, and replacing pyb with machine), I just managed to wake up the RMT peripheral. It could conceivably run onewire with extremely precise timing without requiring much CPU. It should only require two RMT channels (one input, one output) mapped on the same GPIO, set to open drain. 6µs should be no problem at all considering I achieved 0.05µs for the WS2812 :)

The patch and modules are in http://donkey.vernier.se/~yann/onewire.zip - sorry for taking so long.

A GC can be demanded at any time by issuing gc.collect() . It is advantageous to do this at intervals, firstly to pre-empt fragmentation and secondly for performance. A GC can take several milliseconds but is quicker when there is little work to do (about 1ms on the Pyboard). An explicit call can minimise that delay while ensuring it occurs at points in the program when it is acceptable.

Automatic GC is provoked under the following circumstances. When an attempt at allocation fails, a GC is performed and the allocation re-tried. Only if this fails is an exception raised. Secondly an automatic GC will be triggered if the amount of free RAM falls below a threshold. This threshold can be adapted as execution progresses:

This will provoke a GC when more than 25% of the currently free heap becomes occupied.

In general modules should instantiate data objects at runtime using constructors or other initialisation functions. The reason is that if this occurs on initialisation the compiler may be starved of RAM when subsequent modules are imported. If modules do instantiate data on import then gc.collect() issued after the import will ameliorate the problem.

When a running program instantiates an object the necessary RAM is allocated from a fixed size pool known as the heap. When the object goes out of scope (in other words becomes inaccessible to code) the redundant object is known as “garbage”. A process known as “garbage collection” (GC) reclaims that memory, returning it to the free heap. This process runs automatically, however it can be invoked directly by issuing gc.collect() .

The discourse on this is somewhat involved. For a “quick fix”, issue the following periodically:

Note:
Code examples in this section are given for the Pyboard. The techniques described however may be applied to other MicroPython ports too.

This comes into the category of more advanced programming and involves some knowledge of the target MCU. Consider the example of toggling an output pin on the Pyboard. The standard approach would be to write

This involves the overhead of two calls to the Pin instance’s value() method. This overhead can be eliminated by performing a read/write to the relevant bit of the chip’s GPIO port output data register (odr). To facilitate this the stm module provides a set of constants providing the addresses of the relevant registers. A fast toggle of pin P4 (CPU pin A14 ) - corresponding to the green LED - can be performed as follows:

Is there something like a disable_irq() for the garbage collector?

nice… so whats the plan then?

nice… so whats the plan then?

Jacob Beningo wrote about his experiences re. realtime capabilities with MicroPython on a STM32 around 2015 already.

I installed MicroPython to a STM32F4401RE Nucleo board running at 84 MHz. Using proper design techniques, I still found that MicroPython was performing in real-time and meeting all of the deadlines I was throwing at it. Perhaps the kitchen sink still hasn’t been thrown at it, but it has survived a basic shake down thus far.

If you are still reading here, you might enjoy the discussion about interrupt handling accurateness with MicroPython and related things to consider.

All people interested in this topic will probably enjoy reading the canonical documentation about Writing interrupt handlers with MicroPython.

The architecture of the ESP32 means you cannot write to [the internal] flash while also doing timing-critical things.

RMT is coming to Genuine MicroPython.