Knowing about critical sections and their background is an important thing for MCU programming. When starting with basic Arduino code examples on a Sketch level, especially when coming from AVR, everything concerning the execution flow of your program might feel to be pretty much straightforward and as you already know there’s usually no multitasking system in the background going on. So, you might assume: What could possibly go wrong when just calling "digitalWrite()" somewhere?

The answer is: Quite a lot.

In simple terms, a critical section is a group of instructions/statements or a region of code that needs to be executed atomically, such as accessing a resource (file, input or output port, global data, etc.).

Another good one is:

A Critical Section is the part of a program that accesses shared resources. […] We can avoid race conditions by making sure that no two processes enter their Critical Sections at the same time.

But there are no threads?

you might ask. That’s right, but there are interrupts. The concept of protecting your code using critical sections from simultaneously accessing resources doesn’t only come into place when doing multithreaded programming on larger CPUs resp. real multitasking systems, you will also have to protect some of your code from being interleaved by interrupts, otherwise things will probably go south.

So, it’s all about synchronizing access of multiple actors to singleton resources, this piece also has graphics: Process Synchronization in Operating System | Studytonight. In general: There are different mechanisms for synchronizing such things, most commonly they are referred to as “locks” or “mutexes” and there are even “spin-locks”. In this case, we focus on a mechanism called “critical sections”.

In the posts below, we want to outline some aspects specific to the AVR MCUs, but also about the Espressif ESP32 Xtensa dual-core MCU, where we will actually have to take care about symmetric multiprocessing aspects when protecting our code.

As people have been asking again and @weef and me are still trying hard to expose the point of that topic, let’s try from a different angle. This is all about “getting things right” from a software perspective. @weef already mentioned that aspect elsewhere, but nevertheless he also knows about the hardware side of things as well, so we might connect some dots here.

Coming from Standard C library for AVR-GCC (avr-libc), one of the foundation libraries of the Arduino AVR core HAL, there are appropriate macros to assist you in declaring sensible regions of your code as critical sections. They

deal with code blocks that are guaranteed to be executed Atomically or Non-Atomically. The term “Atomic” in this context refers to the unability of the respective code to be interrupted. […]

A typical example that requires atomic access is a 16 (or more) bit variable that is shared between the main execution path and an ISR.

While you might already know the Arduino HAL primitives interrupts() and noInterrupts(), these do not ensure full atomicity of your code.

However, by protecting your code with the ATOMIC_BLOCK(ATOMIC_RESTORESTATE) guard, you will create a block of code that is guaranteed to be executed atomically.

To give you an idea about what might will probably go wrong when taking it too easy:

Protect the read sequence from system interrupts. If an interrupt occurs during
the time the PD_SCK signal is high it will stretch the length of the clock pulse.
If the total pulse time exceeds 60 uSec this will cause the HX711 to enter
power down mode during the middle of the read sequence. While the device will
wake up when PD_SCK goes low again, the reset starts a new conversion cycle which
forces DOUT high until that cycle is completed.

The result is that all subsequent bits read by shiftIn() will read back as 1,
corrupting the value returned by read(). The ATOMIC_BLOCK macro disables
interrupts during the sequence and then restores the interrupt mask to its previous
state after the sequence completes, insuring that the entire read-and-gain-set
sequence is not interrupted. The macro has a few minor advantages over bracketing
the sequence between noInterrupts() and interrupts() calls.

SMP programming for the ESP32

Please read this important piece on how to program for the ESP32. With its two CPU cores, things get a bit more hairy when accessing shared resources.

When programming the ESP32 using the well known Arduino HAL, there are more special effects involved you might not have known about. In the spirit of this thread, this is all about synchronizing access to shared resources between multiple actors. In the advent of affordable dual-core MCUs, there ain’t no such thing as a free lunch (anymore), as all of the problems of programming for Symmetric multiprocessing - Wikipedia will arrive on your table. Take care and enjoy the ride.

On the other hand, the ESP32 has no hardware method for cores to disable each other’s interrupts. Calling portDISABLE_INTERRUPTS() will have no effect on the interrupts of the other core. Therefore, disabling interrupts is NOT a valid protection method against simultaneous access to shared data as it leaves the other core free to access the data even if the current core has disabled its own interrupts.

The original portENTER_CRITICAL only disabled the ISRs. This is enough for single-CPU operation: by disabling the interrupts, there is no task switch so no other tasks can meddle in the data, and because interrupts are disabled, ISRs can’t corrupt data structures either.

For multiprocessing, things get a bit more hairy. First of all, disabling the interrupts doesn’t stop the tasks or ISRs on the other processors meddling with our CPU. For tasks, this is solved by adding a spinlock to the portENTER_CRITICAL macro. A task running on the other CPU accessing the same data will spinlock in the portENTER_CRITICAL code until the first CPU is done.

For ISRs, we now also need muxes: while portENTER_CRITICAL disabling interrupts will stop ISRs on the same CPU from meddling with the data, it does not stop interrupts on the other cores from interfering with the data. For this, we also use a spinlock in the routines called by the ISR, but these spinlocks do not disable the interrupts (because they already are).

This all assumes that interrupts are either entirely disabled or enabled. Interrupt priority levels will break this scheme.

Remark: For the ESP32, portENTER_CRITICAL and portENTER_CRITICAL_ISR both alias vTaskEnterCritical, meaning that either function can be called both from ISR as well as task context. This is not standard FreeRTOS behaviour; please keep this in mind if you need any compatibility with other FreeRTOS implementations.

A post was split to a new topic: ESP32 multicore task scheduling and its watchdog timer (WDT)

Along the lines of a specific problem about interrupt-driven buffering, these resources cover the topic of interrupt (un)handling very well and concise. Using critical sections appropriately is also the solution here. Enjoy reading. 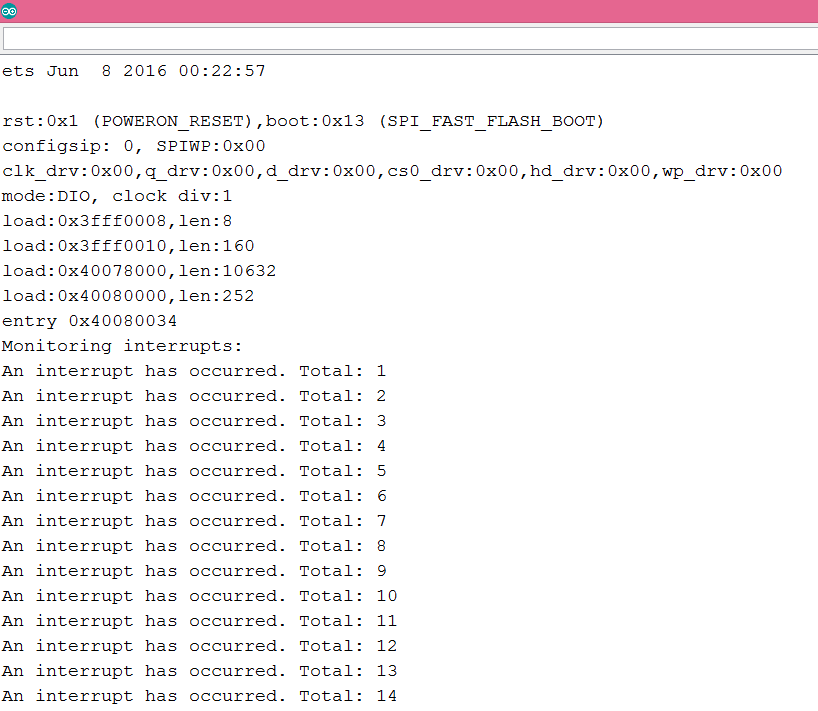 The objective of this post is to explain how to handle external interrupts using the ESP32 and the Arduino core. The tests were performed on a DFRobot’s ESP-WROOM-32 device integrated in a ESP32 Fi…