The BeeMonitor is a “battery powered wireless datalogger”. It’s a compact controller with user-changeable dipswitches, RGB led, buzzer, “plug & play” RJ12 connectors designed for different sensors combinations and is capable to carry 2 different wireless modules, a RFM69W for use in a private network or the RFM95W to connect to an LPWAN IoT network (LoRaWAN) on sub-gigahertz radio bands. Powered by 2 AAA battery’s, operating on 3V the”BeeMonitor” only consumes 35nA in sleep the making the battery’s last for years! Great, isn’t it?

Beekeeping is a time consuming hobby, it’s not so easy as it sounds. Making sure the bees are healthy takes a lot of knowledge and experience. Adding sensors to a beehive helps the beekeeper …

Thanks for sharing my project!
At the moment I also added a scale-prototype to my BeeMonitor. The scale is based on a Bosche H30A load cell, a HX711 converter and only measures the weight of a half beehive (half-scale). It’s the same principal as Broodminder and as seen here: Low-cost half-only scale platform (aluminium). 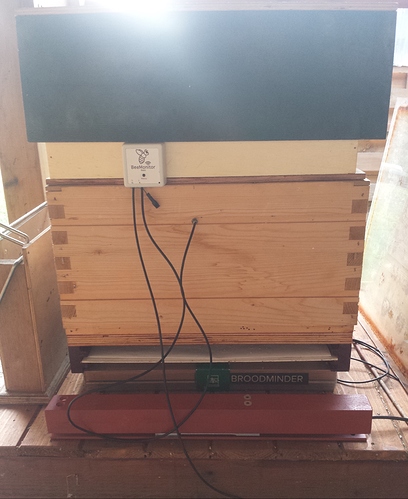 With the scale-prototype attached to the BeeMonitor there’s a higher power consumption, but the calculated battery life would still be about 1 year when taking measurements every 15 minutes. Not bad I guess!

After all that prototyping, testing, measuring, … version 2 of my BeeMonitor will be upgraded with:

Previous features will remain, I changed the internal electronics to archive a better battery life. Finally it was nessesary to add a boost-converter circuit because the load cell converter definitly needs a voltage >2,7V to keep the measurements correct! It also helps to squeeze even more out of the battery’s to keep the BeeMonitor longer alive :)

Background:
The communication is based on a RFM69 module, the data is combined in 1 message before sending. The receiver/gateway decodes the message. Right now I’m using Felix’s (from LowPowerLab) his RFM69-master library.

Future:
The data is now being processed in a custom Arduino based receiver module connected to my Raspberry Pi, running Domotics. That works great for my other sensor modules but it’s not suited for monitoring beehives. That’s why I want to change this to a Wi-Fi based gateway with RFM69 connected with Hiveeyes.
I won’t have a lot of time to start the gateway & software as I want to finish the development of the new BeeMonitor hardware first.