COtL operates and manages over 70 Profiling Automatic Weather Stations across South Australia, including the Mid North Mesonet and Riverland & Mallee Mesonet. The weather station network provides accurate real time data on the development and presence of inversions and other adverse conditions for spraying. Other useful data such as rainfall, wind and fire danger are measured in real time and displayed spatially. 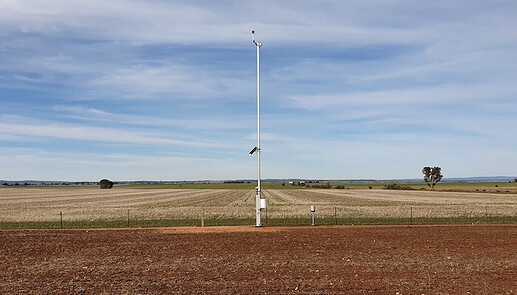 COtL is an acronym for ‘Conditions Over the Landscape’ and was incorporated in 2020 in order to take over the operation and management of the Mid North Mesonet. In meteorology a Mesonet is a network of automated weather and environmental monitoring stations designed to observe localized or ‘mesoscale’ meteorological phenomena.

The COtL team were early movers in recognising the opportunity to mitigate long distance spray drift via a mesonet. After gaining community support and a government grant, the COtL team established the Mid North Mesonet – this was a pilot project using a state-of-the-art automatic weather station network across the Mid North, northern Adelaide Plains and northern Yorke Peninsula of South Australia. The purpose of the network is to provide accurate and targeted data on the development and presence of adverse conditions for spraying.

The pilot project was a success and the company COtL was incorporated in 2020 in order to take over the operation and management of the mesonets. As of February 2021, the COtL team completed an additional Riverland & Mallee Mesonet in SA. COtL is now operating and managing over 70 Profiling Automatic Weather Stations (Profiling AWS).

COtL is an acronym for ‘Conditions Over the Landscape’ and was incorporated in 2020 in order to take over the operation and management of the Mid North Mesonet. In meteorology a Mesonet is a network of automated weather and environmental monitoring stations designed to observe localized or ‘mesoscale’ meteorological phenomena. As of February 2021, the COtL team completed an additional Riverland & Mallee Mesonet in SA. COtL is now operating and managing over 70 Profiling Automatic Weather Stations (Profiling AWS).

The presence of an inversion during spray application can lead to long-distance spray drift. To detect and report inversions, specialised Profiling Automatic Weather Stations capable of monitoring the profile of temperature and wind are required.

Pesticide can move considerable distances from the site of application. The extensive visual damage to viticultural and horticultural crops and residential garden plants is evidence of a larger problem of residues in fresh produce, wine and meat. There is also the risk of pesticide contamination of rainwater, with many regional households reliant solely on rainwater for drinking and other domestic uses. Estimates of the potential loss in value from spray drift were in the order of $180M per annum in the Mid North region of SA alone.

Pesticide drift occurs due to a number of factors including, product formulation (volatility), spraying in inappropriate weather conditions and the incorrect choice of spray droplet size. There has been significant effort to reduce the use of volatile pesticides. Highly volatile herbicides are no longer permitted to be purchased or applied across most of regional SA. There has also been a concentrated education program targeting spray operators on achieving optimum droplet size, choice of nozzle types and operating pressures to reduce drift. Until now, the missing part of the puzzle was the provision of accurate weather data and warning systems of the presence of conditions likely to result in drift, this being mainly temperature inversions and sea breezes.

It is the responsibility of spray applicators to maintain records and determine that sprays will be applied in accordance to the label. Spray applicators must read the product label prior to application. It is an offence under the SA Agricultural and Veterinary Products (Control of Use) Act 2002 to contravene a mandatory instruction on the approved label of a registered agricultural chemical product. However, until now, spray applicators were unable to access reliable information about spray inversion and sea breeze conditions and therefore may have unwittingly been responsible for off-target contamination because of the inappropriate weather conditions.

The purpose of each network is to provide accurate and targeted data on the development and presence of adverse conditions for spraying. It is expected that the availability of real-time agricultural weather data and inversion data will reduce the risk of spray drift. Reducing the incidence of spray drift will also help deliver better water quality in rivers, streams and dams, and reduce crop and pasture contamination thereby preserving South Australia’s reputation for producing high quality food and wine. The establishment and ongoing operation of these two mesonets has wide industry support.

The Riverland & Mallee Mesonet was established in early 2021 and comprises of 30 Profiling Automatic Weather Stations (Profiling AWS) spans the area bounded by Renmark, Pinnaroo, Murray Bridge and Morgan in SA. This agricultural region encompasses a mix of broad acre, viticulture and fruiting crops. For this mesonet, we partnered with Campbell Scientific Australia to deliver the highest quality sensors, dataloggers and telemetry.

How is this Mesonet different from other weather station networks?

The Mid North Mesonet and the Riverland & Mallee Mesonet were built specifically to combat agricultural pesticide spray drift. As of 2021, they are the only permanent networks which measure and publicly display the Vertical Temperature Difference (10m – 1m) to show the presence of a thermal inversion. Farmers should not spray during inversions in order to reduce spray drift.

They are further differentiated from many other networks, as they are one of the few which have been designed by both an expert meteorologist and local agriculturalists. The location of each tower has been chosen specifically, along with the high-resolution network spacing and the sensor placements upon the tower. The installed sensors represent the best available technology. In addition, the Mesonet Team is working behind the scenes with key industry players to be familiar with the most up-to-date science and expected future policy directions. If the spraying rules change to use other weather parameters, the Mesonet is already set-up and ready to adapt in ways that other networks are not.

The Mesonet will be a Tier 2 private weather network specifically suited to agricultural needs, with very similar attributes and requirements to that of the Bureau of Meteorology’s (BoM) Tier 1 network. A large majority of all weather station networks outside the BoM would be considered Tier 3 systems. The BoM rarely takes external data for their internal use, but they have expressed interest in using COtL’s Mesonet data to help calibrate their forthcoming high-resolution (1.5km) regional modelling. As far as we know, no other weather network in Australia can make these claims.

The combined Mesonet is one of the largest agricultural weather station networks with over 70 ten-metre high sturdy towers. For the Riverland & Mallee, we partnered with a gold-standard supplier for equipment (Campbell Scientific Australia) to increase the robustness of the system and minimise interruptions or outages that can often plague these types of networks.

The Mesonet website works well on smart phones and in low internet areas. The website is also one of the few which shows real-time colour-coded maps with wind directions, as well as the option to drill down for each station for time histories of specific variables. The Mesonet data is useless if it can’t easily be accessed and interpreted by its users.

For these reasons, the Mesonet is arguably unique within Australia. As the Mesonet expands further, its reliability and usefulness will only increase with greater economies of scale.

I’m Damon, project engineer for the Mid North Mesonet and the Riverland and Mallee Mesonet in the state of South Australia.

A mesonet is a term for a network of automated weather stations designed to monitor meteorological phenomena at high geographic density and updated frequently.

We built these networks to help prevent pesticide spray drift - the phenomenon in which pesticide spray that is applied to a crop ends up drifting to other crops, sometimes many kilometres away.

Spray drift can be a huge problem, as it can lead to damage or even destruction of highly valuable crops, and can also cause pollution to waterways and harm to native ecosystems.

My father is a veteran meteorologist, and he has done extensive research into the weather conditions that cause spray drift.

The biggest weather factor is thermal inversions, the phenomenon in which temperature increases with increasing altitude, which usually happens in the evening and overnight, but can happen at other times.

Other meteorological phenomena also affect the likelihood of spray drift.

So we designed a weather station to measure all the relevant meteorological phenomena, and in particular to detect thermal inversions.

To read more info about the project’s background, the meteorology and the technical details of the weather stations, see this link:

And the links to the actual mesonet web apps are: